In this 2004 interview, Geoff describes in his own words what Permaculture is, his work and experiences in Iraq, and his agenda for 2005. 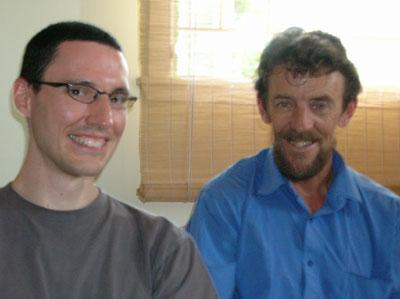 Geoff Lawton is a Permaculture educator, designer and consultant who has taught and implemented Permaculture in 17 different countries. Geoff has been involved in Permaculture since 1982. Having just completed Geoff’s latest Permaculture Design Certificate course, I put down my beer bottle to interview him in Brisbane, Australia.

Douglas Barnes: You are famous for Permaculture. What is that?

DB: You were in Iraq a year ago. What were you doing there?

GL: I was working on an aid project for Counterpart International to redesign and reconstruct a Kurdish village where the people had been displaced by the Saddam Hussein Regime.

DB: What was it like in Iraq? What was the experience?

GL: Well, it was different. I first went in August 2003 and it was just after the occupation. It was extremely hot apart from anything else. But it was very, very tense and there was a lot of misunderstanding by a lot of people, but there was no organisation of any sort. There was no government, there was no customs and there was no department of any government left in place whatsoever. There was no law, really. We were in the hands of the local people who were organising and running the NGO we were working with and were consulting for. So, I had to trust the local people, Kurdish people mostly, to work with and set up this program and design this village and get it rebuilt.

DB: So there was no infrastructure. No police? No banks up and running? How did the society function?

GL: Surprisingly, the society was functioning fine. It wasn’t until we were arriving almost on the United Nation Humanitarian Air Service flight that I realized that, of course, there’s no customs and there’s no local police. And the American military weren’t really policing the situation – they were occupying the country very cautiously. So, there were no traffic rules – everybody was setting the rules themselves. There was no department of water, no department of sewerage, no department of electricity. All of that was being taken care of by the local people. And there were no banks open either. So, you could only change money on the street. The money that was there was obviously just going around. And everything was functioning fine. There was fresh food everywhere, there was plenty of food. Most services were working. Water and electricity and telephones went off at times, but most of the time were up and running.

DB: How could they be running without government help?

GL: Well, I asked that. The local electricians got the energy systems running, the power stations running and the electricity grid up and running to the best of their ability. The plumbers had the water running and the sewage working. And everybody just worked together in the local community. Everybody just cooperated. And most things looked quite normal on the street and there didn’t seem to be many major problems at all.

DB: So the community, perhaps, was tight enough that these sorts of systems could work out on their own? People could rebuild themselves, as it were?

GL: Yeah, I asked those questions as to how it was organised and how people cooperated and how they knew what needed doing. The local population were well over 90% Muslim and the mosque was the main centre of communication. And when there’s five prayers a day, there’s plenty of time and opportunity to meet. So, the mosques were used as a communication system for coordinating what needed to be done for the local community. It was very much a sort of cooperative society with no particular problems – people policing their own community really. And setting their own boundaries within their religious convictions actually.

DB: How successful was the project you were sent there to do? Did you achieve what you hoped to?

GL: Well, we got the job done and we got the village reoccupied. Fifty-three houses were built and a community centre. And fifty-three families reoccupied a village that had been first evacuated in 1995 or displaced by the regime in 1995. But it was actually a village that was originally at least 500 years old. Some extra houses were built, but we got 53 built with all the infrastructure.

DB: Well, you’ve recently come back from Jordan and Mexico.

GL: Well, next it’s back to the farm in New South Wales. But possibly in March, we’re over to the eco-show in New Zealand and a small educational tour talking to dairy farmers in New Zealand for about 10 days. After that a national conference in Melbourne and then a [Permaculture Design Certificate] course in New York in a catchment of New York in the Catskills. And in September, a course in Melbourne with [Permaculture founder] Bill Mollison co-teaching, which will be filmed as an educational video. And then in October, a course in Northern New South Wales. That’s all that we’ve got on the potential horizon.