In permaculture, we look to a problem as being a solution. Much money is spent battling the cold in places like Canada, Scandinavia, Scotland, Tasmania, Russia, Argentina, and so on. But the cold can also be a valuable resource. Unfortunately, the cold is a largely untapped resource in most places. That said, there are some hopeful developments being made. For example, many office towers in Toronto, Canada are now cooled using a deep water cooling system that draws frigid water from Lake Ontario. While the buildings themselves are not sustainable, this method is less energy intensive than powering large air conditioning units to cool each building.

There are techniques for the rest of us – passive cooling techniques – that we can use to beat the heat. 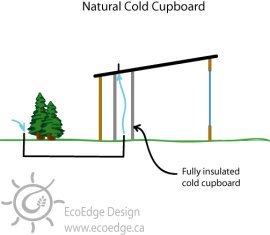 Food needs to be kept cool for preservation purposes. The zeer pot described below is one cheap solution. But if one has the means, it is possible to design a passive cold cupboard that doesn’t require energy to operate. In almost any region of the Earth, the ground is going to be cooler than the surrounding air in the summer season (areas of geothermal activity are an exception to this and offer heating potential instead of cooling potential). A cold cupboard makes it possible to replace a large part of one’s cooling needs with a system requiring no outside energy inputs.

The cupboard itself would be a fully insulated space within the home with the same magnetic seal on the doors that refrigerators have. Cool air is drawn in to the bottom of the cupboard through a pipe running under the house with the pipe itself 4 to 6 feet (1.2 to approx. 2 metres) underground and with an opening to the surface outside. (See diagram – click to enlarge.) A drain should be installed in the pipe to allow for condensation forming in the pipe. A second pipe at the top of the cupboard vents to the outside of the house. The external portion of this vent should have access to full sun and be painted black. This will cause the air inside it to heat and rise, which in turn causes cool air to be sucked in through the bottom pipe. 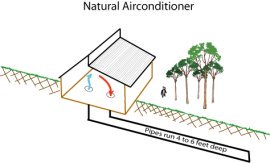 To cool the house itself, a similar technique can be employed. In this case, a closed circuit of pipes is laid 4 to 6 feet (1.2 to approx. 2 metres) beneath the ground outside the house. A small fan is then used to force air through the system and blow cold air into the home. One variation on this is the have one end open to the surface and draw the air out through a vent pipe as is done in the cold cupboard described above.

[UPDATE: For those in temperate climates, the same thermal mass that helps to keep passive solar homes warm in the winter also helps to cool the house in summer. The large thermal mass in a home will remain cooler than the outside temperature on hot days, and serves to regulate indoor temperatures.] 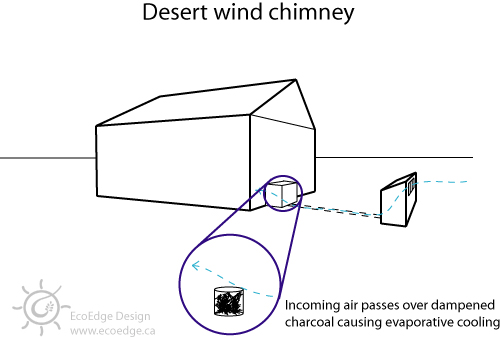 Another variation is the wind chimney, which is sometimes employed in deserts. In the direction of the prevailing cool winds, a scoop-like vent is placed and a pipe is laid under the ground from it to the house. Where it reaches the house, the air passes over a container filled with dampened charcoal. This causes evaporative cooling of the air before it enters the home. Charcoal is used both as a sponge to hold the water and as a means of keeping the water fresh

Another strategy put into effect in tropical and sub-tropical areas is the shade house. A shade house is simple an area on the shaded side of a home with a vine-covered trellis to create a shaded sanctuary. Often these shade houses will contain an outside kitchen to prevent the heat of cooking from entering the home. Subtropical areas would have two kitchens, one inside for the winter, and one outside for the summer. Urban temperate areas suffering from the thermal island effect would also benefit greatly by the shade house strategy. 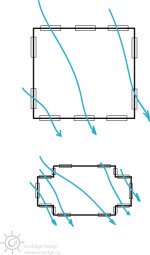 In tropical regions, it is beneficial to design a traditional tropical home with wall vents and a vaulted roof of permeable material to draw cool air in and push hot air out. (See diagram.) 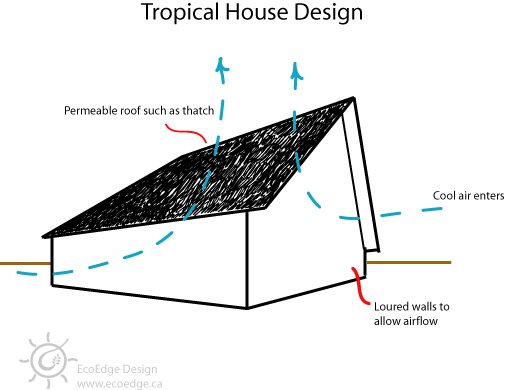 These strategies are not only sustainable cooling solutions, they also save money by using available cold as a resource.

If you happen to live in an area that depends on a lot of electricity, and you’re finding electricity to be rather expensive…or would rather wisely eliminate as much of that expense as possible so you could spend your hard earned money on other things, then you need to be looking for ways to reduce or eliminate your electrical use as much as possible. Where can we cut our electric bills?

We’ve all heard of changing our lightbulbs to the new and improved warm fluorescents (no, they no longer turn your skin green). Of course, we can shut off our lights when we’re not in a room, shut off all electrical appliances we aren’t actually using. After all, there’s really no need to have all the lights on in the house, the stereo blazing and the TV on with no sound while we browse the internet. Those kinds of things are easy to see, and cutting back on them does a lot of good. But a large portion of the energy going into a household is actually used for heating and cooling rooms, food and beverages.

Even if you think you’re rich enough to waste your money on electricity, you still need to be concerned about emergency situations when the power companies stop giving you what you need. If you lived through the LA blackouts as I did…then you know what I mean. Believe it or not…there are a number of free and effective ways to nip your electrical cooling bill in the bud while also be prepared for power-outages.

We can consider passive solar cooling and air-conditioning. Please note that we are not talking about the use of photovoltaic solar panels, those are active solar devices. I’m talking about passive solar cooling. A lot of people have trouble imagining that the hot summer sun, can actually cool your house, but it can. The second law of thermodynamics is our best friend, and it works endlessly for free (or at least as long as the sun exists).

Heat rises (in the case of hot air), heat can radiates outward from warm surfaces, and heat will always move toward cooler areas, and if it happens to draw liquid with it, and that liquid evaporates…the inside surface of what just evaporated will be cooler. Solar chimneys, underground cool rooms (the old fashioned cellar), and the zeer pot, are just a few ways that use these aspects to our advantage to help us cut our power needs forever, and for free. After all, isn’t that what we all want? Why should we slave away at work all day and then spend our hard earned money on things that we can get for free?

To the surprise of many, the world’s cheapest refrigerator/cooler costs less than $2 dollars to make, uses minimal resources to produce and runs completely without electricity. It’s called a zeer pot, or the pot-in-pot and was developed by Mohammed Bah Abba, who realized that he could put the second law of thermodynamics and transpiration to work for him.

The zeer pot, is actually two earthenware pots (I’m assuming they are both unglazed), one pot smaller than the other. The smaller pot is put inside the bigger pot, and the space in-between them is filled with sand. The sand is made wet with water (twice a day) and a wet towel is put on top of the two pots to keep warm air from entering the interior. As water in the sand evaporates through the surface of the outer pot, it carries heat, drawing it away from the inner core, thus cooling the inside of the inner pot which can be filled with soft-drinks, water, fresh fruit, vegetables or even meat. A damp cloth placed on top keeps the inside pot away from hot air. In this way, fresh produce can be kept for long periods of time without the need for electricity, or camping coolers made high embodied energy. Tomatoes and peppers will last for up to three weeks, and African spinach, or rocket, which normally would spoil after just a day in the intense African heat, can and will remain edible for up to twelve days. Eggplants will keep for up to 27 days instead of three. It can even be used for storing sorghum and millets for a long time since it protects from humidity, thus preventing fungi from developing. The zeer will keep water (and other liquid beverages) at about 15 degrees Celsius (maybe acceptable for Guinness), and even meat can be kept fresh for long periods.

The new technology is now being used by farmers at the market. Fresh produce is kept inside, with just a couple fresh items displayed on the damp towel resting on top. In this way, most of the produce is kept hidden away from both warm air and insects. In the past, all produce was displayed in the open air, attracting flies resulting in stomach disease such as dysentery. Now food can be kept fresh for longer and kept away from flies…even miles away from electricity or ice. The key however, is a certain degree of aridness, for at a certain amount of humidity, the benefit of evaporative cooling tends to dissappear.

Instead of having humming, heat producing, electrical, bank-sapping refrigerators and freezers, we could have zeer pots stashed away in or near the garden, by the back door, out on the porch or balcony…anywhere. We could have them on the truckbeds of roadside vegetable stands, in cross-country delivery vehicles…at the local farmer’s market. We no longer have to make choices about freshness based on expensive camping coolers, refrigerated trucks, ice machines and electrical outlets. We can provide our own endless supply of refrigeration for less than two dollars.