As promised, here is a brief look at some more interesting patterns we get from the properties of surfactants.

How can you tightly pack elements in a design without resorting to the familiar and troubled row agriculture? There just so happens to be a property of surfactants that can help provide a little inspiration for that problem.

In the last pattern article, we looked at adhesion (like things being attracted to each other), and the polar/non-polar features of surfactants. We had considered the effect of surfactants on surface tension, but if we keep adding surfactants to a solution, the non-polar ends attract one another, and form spheres called micelles. The polar heads of the molecule – the ends which are attracted to water – are on the outside, and the non-polar ends are in the centre. If you keep on adding more surfactant, you will start to get long cylindrical micelles. It is here where things start to get really interesting, and really useful for us as designers. The micelles repel one another, meaning that they exert a force on each other. If you recall from the first article, applying force on a system decreases its symmetry, but increases its patterning. The repulsive force of micelle against micelle, forces the system to rearrange in such a way as to minimize the total energy.

The following image shows this process in action. 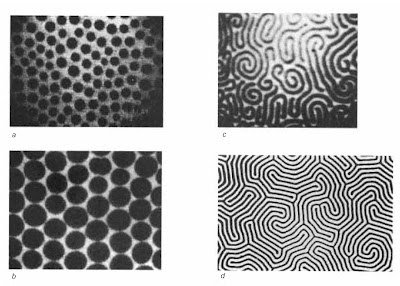 From The Self Made Tapestry: Pattern Formation in Nature by Philip Ball

In a and b, micelles form. Notice how the hexagonal array discussed in the previous article arises here. As more squeezing occurs, a different pattern emerges, shown in c. There is fairly efficient use of space at this point, enough so to put a similar pattern into a design. With further force, the highly structured pattern in d emerges.

Why would anyone go to all this trouble? While rows are easy to build, they are not without their problems. I have seen “eco-farms” with row planting with the rows running up and down the topography. Barring thoughtlessness, I presume the intent is to promote erosion. These non-linear patterns are less conductive to runoff. Straight rows also require a sizeable enough patch of land to accept their unnatural array. This is often unsuitable in tight areas, or the rocky areas so common in the Canadian Shield. Rows are also generally set up to accommodate cultivators, which are great if your intent is to damage the soil, and increase erosion. We aim to make soil healthier, however, not degrade it. Rows, too, tend to be planted in pest-smorgasbord fashion, with grouping of like plants together, making it easier for pests to travel from preferred plant to preferred plant.

One could use these more natural arrays either for non-linear rows or as pathways for keyhole bed layout. While it would be a bit much to strictly follow such a pattern, it does give us ideas for systems a little more imaginative, and adaptive to the landscape than straight rows.

Coming up next, we’ll start to look at waves and pulses. Stay tuned!