Special thanks to Steve Cran

The earthquake and devastating tsunami of March 11, 2011 shocked the world with images of widespread destruction. All during my 13 years in Japan, I lived under the constant threat of “The Big One.” It never came while I was there, but when it finally did, its damage directly affected many of my family and friends living in Japan.

While no structure can be completely earthquake or tsunami proof, there are design elements that can be included that may reduce the damage caused by these events. I’ve already written on a simple design tweak to increase the strength of a building in an earthquake, now I’d like to look at strategies for dealing with tsunami.

After the 1998 tsunami that hit Papua New Guinea, permaculture aid worker Steve Cran toured the devastated areas to find out what strategies might be employed to deal with tsunami prone regions. One pattern that emerged was that areas with dense tree belts along the coast suffered less damage from the wave. Inland tree belts also assist in reducing the power of the wave and filtering our abrasive debris picked up by the wave that can lead to further damage of structures. Again, tree belts help, but as Steve Cran pointed out to me in a recent correspondence, “You can’t stop a tsunami but you can reduce its impact inland.”

Structures themselves can be designed to be more likely to survive tsunami. A boat-shaped wall at least 2 metres high with the “bow” and “stern” perpendicular to contour can help to deflect the wave. Additionally, buildings can be boat shaped and built on piers to better allow the wave to pass as it both comes in and goes out (both directions being destructive). Such a building shape could easily be achieved using concrete – a building material that is commonly used in Japan already. While concrete is an energy intensive material, it is durable and can be used sustainably. Existing earthquake dampening systems could be used in such a design as well. 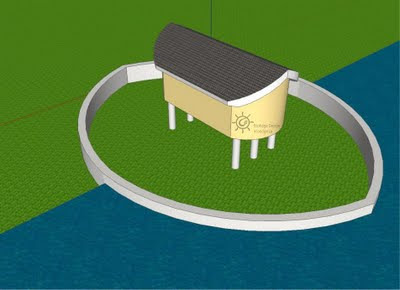 For community design, Steve recommends compounds “laid out like bricks, offset, two over one so when the wave comes, the front compounds break the force of the wave as it moves inland.” In the case of Kessenuma and other ravaged communities in Japan, property is already marked out, making the brick-like pattern inapplicable. However, houses could still be built as described above to lessen the impact of the wave. Whether such a home would survive the over 10-metre waves that hit the coast is uncertain. They would, however, increase the likelihood of buildings surviving. 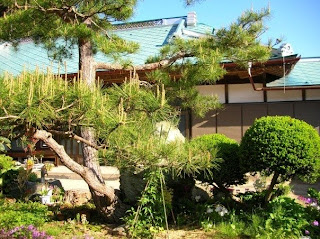 Many kind readers have asked about the safety of my family. My mother and father-in-law live in the mountains of northern Ibaraki and had to endure many quakes over magnitude 6. Despite this, their 150 plus year-old farmhouse survived just fine – a testament to the traditional home design and construction in Japan. Some earthen plaster did fall off one of the out buildings on the farm, but a little sand, some clay and straw and it will be good as new. They are about 70 or 80 km from the Fukushima Daiichi nuclear power plant, but so far the radiation has not presented a problem.

This blog’s coauthor Scott Meister also safely but nervously road out many magnitude 6 quakes at his home 16 km from the summit of the slumbering Mt. Fuji.