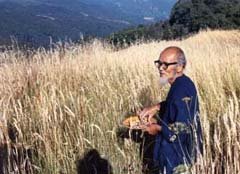 Seed balls are simply seeds mixed with equal proportions of dried compost and clay, formed into small balls, and dried for later sowing.

To make them, simply select the seeds to be used – thick-skinned seeds will need to be scarified, and some seeds need heat or cold to bring them out of dormancy. Legumes will require inoculant if they are to fix nitrogen. Also, for species that can benefit from mycorrhizal relationships, adding the spores of mycorrhizal fungi such as the genus Glomus and/or Rhizopogon, species Gigaspora margarita, and/or Pisolithus tinctorus would be beneficial, though not necessary. [This list is not exhaustive, but these are readily available through Fungi Perfecti.]

Using this method along with other Natural Farming techniques, Fukuoka san was able to produce 590kg (1300lbs) of winter grain (barley or wheat) and 22 bushels of rice per quarter acre of land. Moreover, these techniques require the labour of just two people working a few weeks a year to attain the crop. There is no plowing, no weeding, no application of biocides in any form, and no fertilising. 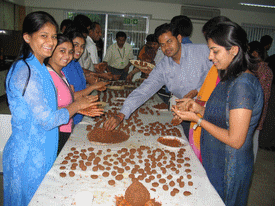 Seed balls may be obscure in North America, but in parts of the world already badly damaged by human activity, their use is easily recognised. The BCIL Alt.Tech Foundation of India uses seed balls to regreen Bangalore. And as most of the planets deserts are the creation of mankind, we can follow their lead to undo the damage we have done. 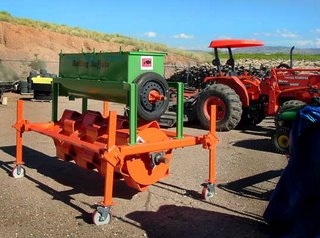 Imagine tanks used, not for warfare, but to pull land imprinters to give seedballs an advantage. Imaging cluster bombs, not killing, but being used to distribute seed balls over deserts creating green explosions. While some of these ideas may seem unrealistic, they are within the realm of possibility… if we only act.