In the interests of saving people’s crops from raiding elephants, and to save the elephants themselves, one popular technique, widely taught and promoted in permaculture circles is the “Ha-Ha!” fence. The “fence” is actually a trench about 1.5 to 2 metres deep with steep edges to create a barrier that elephants cannot cross (so people with the fence can watch the elephants and say “Ha-ha!” as their crops are safe). In this way, farmers’ crops can be protected without having to harm or kill elephants. 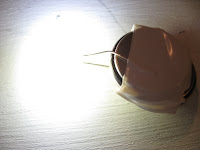 The drawback to this method, however, is that people have to put in considerable effort to dig these trenches out to protect their crops. Now, thanks to the ingenuity of a Thai villager, adopted by the Elephant Conservation Network (ECN) and the Zoological Society of London, there appears to be a simpler, less energy intensive method to deter elephants. The villager had strung old CDs along his fence in an effort to scare off the elephants. It was observed that, particularly during a full moon, “the CDs twisted and shone, mimicking a person with a torch.” It would be a simple matter to rig up a few throwie-type, battery-powered LED lights so that nights without the full moon would also have protection.

This discovery is promising, but a follow up of the success needs to be seen. Elephants are very intelligent animals and could potentially figure out that the threat is merely a trick. But if it does work over the long term, it means a simple and cheap solution to crop-raiding elephants; and that is good news for people and pachyderms.

Drylands present a serious problem for agriculture and for human development; and the problem is worsening. Standard agricultural practices have actually created major deserts in the world including the deserts around Mesopotamia. Twenty-five percent of the land on Earth is either desert or threatened with desertification. The problem strikes poor regions (like Africa with 66% of the land affected by desertification), and rich regions alike (as with Texas, where 40% of pastureland is now too arid for use). Almost 70% of the agricultural dryland is degraded by desertification.

Yet, our agricultural practices remain largely unsuitable for most climate conditions exacerbating the problem. Our methods are contributing to salinisation and soil erosion. Tragically, many people live in or depend on the agriculture from these areas. Generally, in most arid regions there is enough rainfall to re-green an area, but the rain that does fall quickly washes away taking precious soil with it. 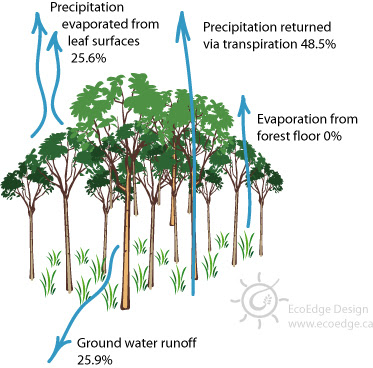 One of the strategies that has proven affective in combating and even reversing desertification has been reafforestation. Trees help the land hold water, are more drought tolerant than most plants, and their detritus helps build up soil. Trees serve as windbreaks which help reduce evaporation and soil erosion, and provide shelter for humans and animals. Trees also make up a significant part of the hydrological cycle, providing virtually 100% of the water for inland continental rainfall.

Consider the situation in the two most populous nations in the world: China and India. China is suffering from encroaching deserts and already has 19% of its land suffering from salinisation. India is chiefly arid or semi arid, though this was not always the case. Eight Thousand years ago, Asia had an estimated total of 15.132 million km2 of forests. Today, that figure is down to only 4.275 million km2, of which just 0.844 million is natural forest (i.e. not tree plantations).

To assist in reafforestation, we can make use of the swale. Simply put, a swale is a water-harvesting ditch cut level into the ground on contour. Swales are not diversions ditches. Their job is not to carry water form one place to another. Water will continue to flow over land until it reaches the lowest point it can find. Creating swales is essentially creating low points for water to collect in. The swales catch rainwater running off the land, allowing it to soak into the land. Once in the ground, water is more protected from evaporation – a very serious problem in deserts – which reduces the problem of salinisation.

Swales are often the most cost effective type of earthworks (depending on the situation), catching the most amount of water for the work put into their construction. Once constructed, swales greatly assist the growing of trees by capturing rainwater that would otherwise run off the land, eroding the soil in the process. Additionally, swales also help to recharge groundwater – a water source that has become greatly taxed since the proliferation of motorised pumps following WWII.

By reducing soil erosion and capturing water that would otherwise have been lost, swales contribute to the creation of healthy soils. The trees grown in conjunction with swales can further aid in soil stabilsation and can contribute vital nutrients for the soil from this detritus. Trees and associated groundcover plants can provide symbiotic hosts for mycorrhizal fungi, which, in turn, can boost plant growth, protect plants from acid rain, salt and pollutants (see also here), and greatly benefit the fertility of the soil.

Construction of Swales for Arid Climates

Arid climates are characterised by large rainfalls occurring in just a few events each year. As such, swale dimensions in these regions will be a little different than they would be in regions with more rainfall. One easy and inexpensive way to find a level contour is to construct an A-frame as shown in the diagram and hang a string with a weighted end down from the top of the A-frame. Find a level surface and mark on the cross piece where the string points to. This mark will show you where level is as the diagram below shows. You can use this A-frame level to map level areas along the ground. Along the level point, place stakes as markers. At the end, you will have marked out a contour line. 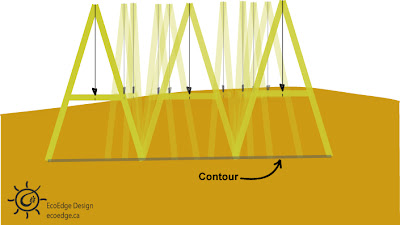 Mark out contour lines about 20 metres apart from one another. (Twenty metres is a rough guide, as the shape of the land will make the contour lines closer in some places and further apart in others). Dig the swales to be 2 to 3 metres across and about 50 cm deep. The excavated earth is used in construction of the swale’s mound on the downhill side. When digging the trench and when constructing the mound of the swale, do not compact the earth. This will assist in water infiltration. Also take care to make the top of the swale level. In this way, it will be less likely to erode should they overflow with rain. Below is a sample of an actual swale designed by designer Dan Palmer. These measurements can be flexible as long as these swales for drylands are about 2 to 3 metres across. 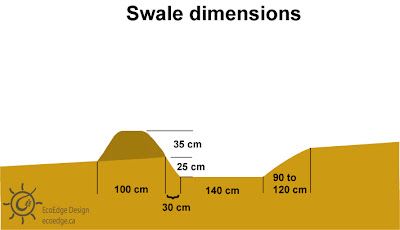 And here is an example of swales used in Kafrin, Jordan: 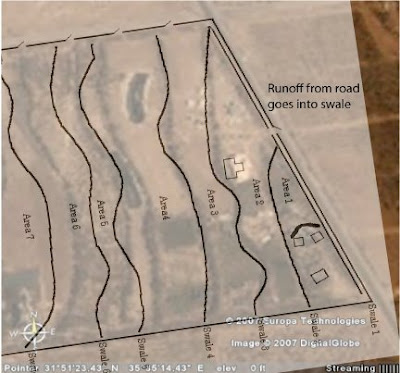 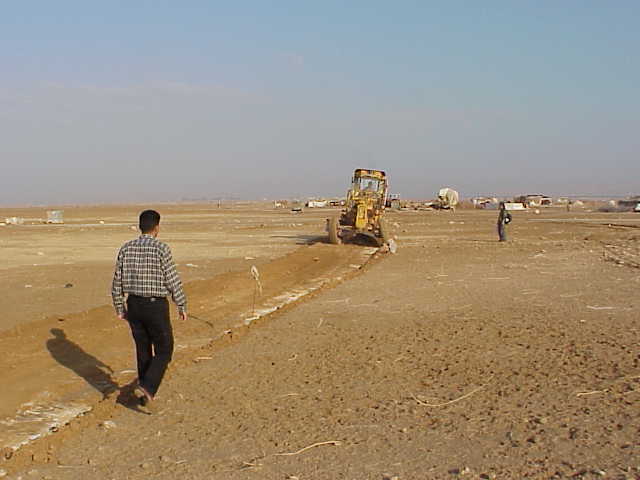 After the swales are dug, you want to mulch the area and plant groundcover vegetation to cover the bare earth that has been exposed. Since you will be planting trees along the swales in the future, you want the canopy of the trees at maturity to shade the swales. This will help reduce evaporation. Swales can be mulched to assist in water retention, and the swale itself can serve as a footpath. Allow at least one heavy rainfall to fall before planting trees along the swales and do not plant on the swale mound itself. This will help ensure the survival of the newly planted trees.

As I have had a request for information specific to the semi arid regions within Andhra Pradesh, India, where rainfall can be as low as 500 mm per year, I include this list of helpful tree species for that region:

The following species will absorb nitrogen from the atmosphere and, with the aid of symbiotic bacteria, will fix the nitrogen in the soil.

This list is not exhaustive, and other species are certainly possible. Other species can be selected based on human needs for food, medicine and fuel, or for animal fodder.

When planting the initial system to repair the landscape, 90% of the species should be the support species: the nitrogen fixers. Among them, interplant the long term productive fruit, nut and timber trees. As the system grows, you can trim the support trees (or cut them out entirely for timber or fuel). The trimmed branches should be left laying where they fall so that they provide mulch and nourish the soil. The following diagrams represents ‘chop and drop’ fertilization. For the purposes of demonstration, they show the entire tree being cut, but in reality, the tree would only be trimmed until it was ready for final harvest. 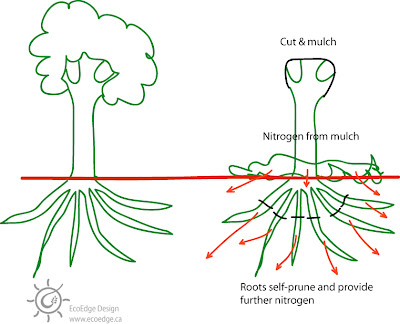 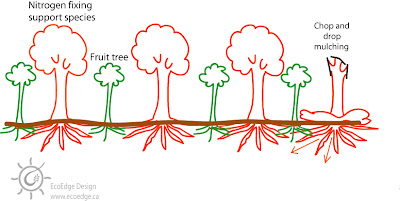