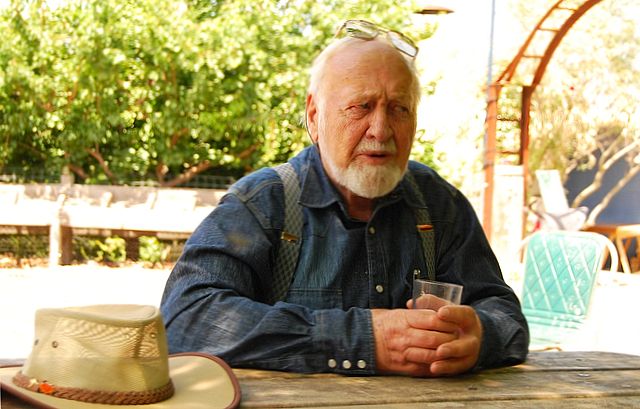 Those were the first words Bill Mollison said to me. It was in a lecture hall in the Chemistry Building of the University of Melbourne on the first day of a permaculture design certificate course in 2005. It was the start of two glorious and gruelling weeks that would change me forever.

Born in the small town of Stanley, Tasmania on May 4, 1928, Bill became a real renaissance man of his day. Bill had been fisherman, lumberjack, scientist, academic, activist, and more in his time.

It was during his time as a scientist in November, 1959 that a spark ignited in Mollison’s brain while he was watching browsing marsupials in Tasmania. He wrote in his journal “I believe that we could build systems that would function as well as this one.” With this simple statement, Mollison, in his own words, “had broken the barrier between passive observation… and the active creation of many similar systems that we could construct ourselves.”

It was during this period of research that Bill came to see that the resiliency of a system was established, not by the number of species in it, but in the functional connections between the species in that system. In Mollison’s words,

This then was both the precursor and the core of Permaculture; the realisation that we can create systems, based on analogies of natural systems, or try to improve them for productivity, and then allow the created system to demonstrate evolutions, stepping in at critical stages to manage, to add or subtract species, and observing at all times. These system analogies, if well constructed and recorded, could produce a yield that could be constantly accessed or improved, and would also need minimal maintenance energy, after the establishment phase.

It was more than a decade after Bill’s initial observation that he started to build these systems, which were then introduced to the world in 1978, when he published Permaculture One with his student David Holmgren. From there, Bill took permaculture around the world, teaching thousands, and installing systems in Africa, Australia, Asia, Europe, and North and South America, building a worldwide permaculture movement.

For his work, Bill received many awards, including the Right Livelihood Award (AKA Alternative Nobel Peace Prize) in 1981, and being named an Australian Icon of the Millennium.

Bill was a man of a different age. Although separated by continents, and born more than a decade apart, he reminded me very much of my own father, who was born in 1914 and was killed 8 years before my course with Bill. Physically, Bill looked a lot like my father, and his preference for speaking in subtle sarcasm was also very much like my father. It was impossible for me not to grow a fond attachment for Bill, and to almost mistake him for my father.

People who didn’t know Bill thought love was his inspiration for his tireless work in sustainable design and education. It wasn’t. It was fierce anger at the thoughtless destruction of the natural world, and the harmful practices of conventional agriculture and architecture that were damaging land and wasting energy. And with this anger, he would ruthlessly shred his opponents.

Mixed with this anger was also a devilish sense of humour. When Bill wasn’t probing to find what your buttons were so he could push them, he was busy making a joke — and preferably a dirty one. Being with Bill was never boring.

Bill passed away on September 24th, 2016 at the age of 88. He was dearly loved, and will be sorely missed by his many thousands of students around the world.

Goodbye, Bill, and thank you.