Thanks to a student of mine, Tom Marcantonio, I gained an appreciation of this common temperate North American tree. Tom had learned of the use of its inner bark for cordage, and was using stakes, and cordage made from the tree to support his plants. 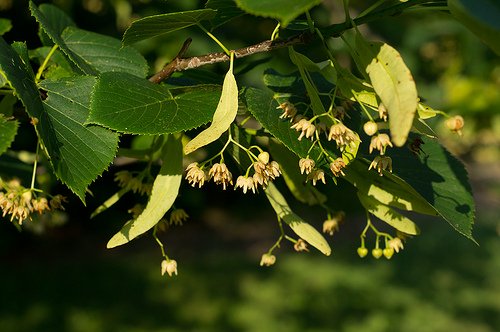 Tilia americana, also known as Basswood, and American Linden, is hardy in USDA zones 3 to 8, making it a common feature on the landscape. It does well on deep, well-drained soils, but it can handle dry or heavy soils. Left alone, it could grow to 21 meters (70 feet).

Its a useful winter browse for deer, and its buds are food for birds. The summer fruits are eaten by birds, squirrels, and mice. Older trees tend to rot out in the center, leaving habitat for animals. Its nectar makes it a good bee fodder. However, it does have the tendency to attract pests; among these are borers, aphids, leafminers, scale, and Japanese beetles. As we say, however, the problem is the solution. This tendency might make it a useful tool in a push-pull integrated pest management regime. If anyone has tried this, please let us know how it went.

The soft wood does not splinter easily, making it a good wood for carving. Its ability to coppice makes it all the more appealing. To make cord, soak branches, then peel off the bark. The inner bark is the part then made into cord.

The sap has traditionally been boiled to make syrup, or taken as a drink. Young leaves can be cooked and eaten as well.  The nuts and flowers can be ground into a paste that is said to have a chocolate taste. I’d love to test the truth of this claim. The flowers can be put in salads, or brewed into a tea. I have seen one recommendation cautioning moderation in drinking the flower tea as it could cause heart damage. I think this warning stems from the β-Sitosterol it contains. For this reason, it is probably best for pregnant women to avoid altogether. The flowers do have a whole host of interesting chemicals in them, including but not limited to bioquercitrin, which helps regulates cell growth. Recent research suggests that T. americana can be used as an anti-anxiety treatment.

There are a few places I could use this tree on my site as part of a shelter belt. Though I have seen no mention of its use as a fodder tree, I would imagine it could be used as such. I suspect it would work well in a silvopasture setup.  Its many fine properties make it an appealing candidate that I am sure to utilize.