Being a mushroom nut, it has taken all the discipline I can muster not to have a fungal species as Species of the Month yet. I can wait no longer. This month’s species is Trametes versicolor, the turkey tail or yun zhi mushroom. This saprophytic, polypore mushroom is a white rot mushroom, meaning that it breaks down lignin (the organic polymer that gives trees their strength). This mushroom is found in boreal, temperate, sub-tropical and tropical regions. 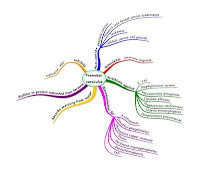 It has many uses for bioremediation. It can be grown on woodchips in burlap bags. The bags can then be stacked in runoff channels below animal paddocks to filter E. coli, Listeria, Candida and Aspergillus, protecting watersheds from contamination.

The research of mycologist and permaculturist Paul Stamets suggests T. versicolor might be effective in out-competing pathogenic fungi like Armillaria spp., Sparassis crispa and Hypholoma capnoides.

Heat-killed mycelium of T. versicolor has been used to absorb up to 97% of mercury ions from water, suggesting its value to clean water systems.

It is also very valuable in either breaking down or bioaccumulating some of the worst manmade pollutants in our environment, among them antracenes (used in dyes, wood preservative, naphthalene and other products), chromated copper arsenate (used in pressure-treated lumber), dimethyl methylphosphonates (used in VX, sarin and soman chemical war agents), dioxins, persistent organophosphates (used in pesticides), pentachlorophenols (used in pesticides and preservatives), and TNT.

This fungi grows well on hardwood, including apple and cherry (unlike other fungi), as well as on fir, pine, spruce, larch, cypress and juniper. It can be harvested in the wild (in which case, only pick 25% of a patch of turkey tails), or cultivated on logs raised off the ground or in pots filled with sand. Tree stumps can also be used to cultivate turkey tails. It produces mushrooms annually from spring to late fall, though mushrooms usually appear most in the late summer.

The mushroom itself is very tough and leathery, and you will need a knife to harvest it. It can be boiled and used in soups or drunk as tea. The flavour is a little bitter, but compared with many other polypore mushrooms, the bitterness is mild. In a soup with other flavours, the bitterness will go unnoticed.