Comfrey (Symphytum officinale). What better plant to feature as Species of the Month than this herbaceous member of the Boraginaceae family? 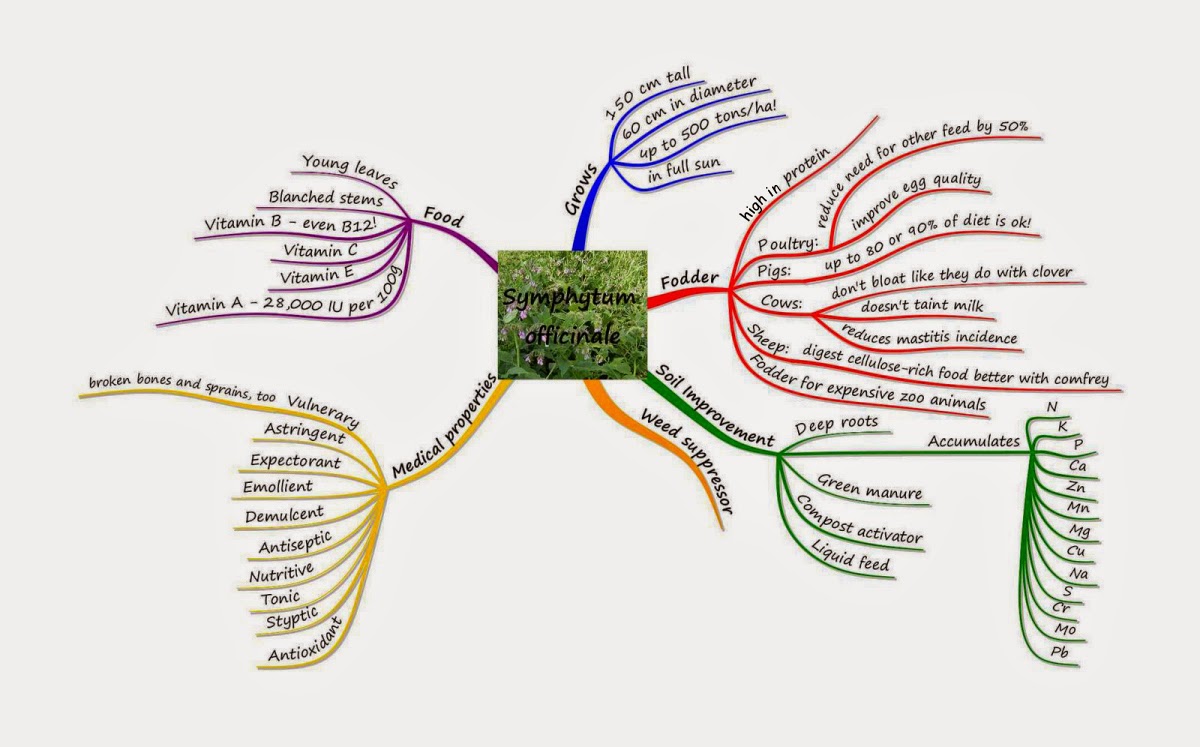 It grows up to 150 cm tall and 60 cm in diameter in warm climates. The optimum growth is in climates where day and night are equal (i.e. the tropics). There, production of 100 to 200 tons per acre (roughly 250 to 500 metric tons per hectare) is possible! However, it will grow in temperate regions. It prefers full sun and soils rich in nitrogen and humus, so interplanting with nitrogen fixers and mulching is a good idea. You can expect to get at least 10 years out of one plant, and a well-attended plant might outlive you!

t is protein rich with 15 to 30% dry-weight protein content, rivalling some legumes. It is used as a pig fodder successfully in amounts up to 80 to 90% of the diet! For poultry, it can reduce the need for other feed (be that your concoction or processed feed) by 50%. Egg quality will improve with yolks being brighter. Cows don’t bloat when eating comfrey like they do with clover. And too much clover can taint the milk – not a problem with comfrey. Also, mastitis is reduced in cows fed comfrey. Wilted comfrey mixed with straw fed to sheep at a ratio of one part comfrey to one and a half parts straw increases the digestion of the straw. The flowers make it useful as bee fodder. It is used in zoos as fodder for many (expensive) animals. Its tremendous production rates make it a great elephant feed.

Comfrey has deep roots which are hypothesized to draw up nutrients from subsoils. This characteristic would make it a valuable nutrient cycler. There are claims that it accumulates nitrogen, potassium, phosphorus, calcium, zinc, manganese, magnesium, copper, sodium, sulfur, chromium, molybdenum and lead (the latter might make it useful in cleaning roadside soils contaminated by the use of leaded gasoline). It can be used as a green manure, and its ability to be cut right down to the ground a few times a year helps in this respect. It can be used as a compost activator. For hard evidence, see the article Does Comfrey Really Improve Soil? by Ben Stallings.

It can be made into a liquid plant feed:

You can also use it to fill niches to suppress weeds.

Traditionally the whole plant has been used. Young leaves can be added to salads in small quantities to boost nutrient uptake. The stems can be blanched and eaten like asparagus. It is the only known plant source of vitamin B12.

Contains allantoin, which assists in the repair of damaged tissues. It is used as a poultice for cuts, scrapes, burns, skin conditions, ulcers, broken bones, strains and aches. It can help with digestive problems. The juice from leaves can be rubbed into the coats of dogs with mange.

The full catalogue of uses is:

Slugs go for comfrey, so you could use it to attract slugs away from plants. If you really want to go all out against slugs, grow a ring of comfrey around your garden, separating the garden with an electric fence. The comfrey will attract the slugs from the garden. Then run pigs in the comfrey. The pigs will love both the comfrey and the slugs. And the pig urine and manure will attract in even more slugs, hopefully depleting your local population for a while. In place of the pigs, poultry could be run as well.

Comfrey does contain pyrrolizidine alkaloids which have the potential for liver damage. There have been warnings put out against the use of the herb, but evidence of incontrovertible documented toxicity is lacking. In the book “The Safety of Comfrey,” J.A. Pembery found no reported cases of pyrrolizidine poisoning from comfrey. He did find one case of pigs in Germany being poisoned by nitrates in comfrey, but not by pyrrolizidine. Lab tests on rats suggest that to cause harm to humans, one would have to eat about 20,000 leaves. Certainly from anecdotal evidence, many people have eaten comfrey without reservations for decades and been very healthy. Still, to err on the side of caution, limit consumption. Also, drying the comfrey reduces the amounts of alkaloids.