The following is a writeup of a workshop given at the fall 2010 conference of The Permaculture Project – GTA.

This guide is aimed at helping you to design an energy efficient, passive solar home in a temperate environment. However, there is more to consider when designing a home than just energy efficiency. The interior of the home must also be functional and inviting. Fortunately, this can be done without compromising on the gains derived from passive solar design.

What is Passive Solar?

As opposed to active solar, which is used to generate an electrical current, passive solar is a means of utilizing heat from the sun.

At 45° latitude (north or south) there are 957 Watt hours per square metre available for heating on a winter day. We can use this energy to assist in heating rather than relying totally on external sources of heat.

Taking advantage of free solar heat will not only save money, it will also help in making a building sustainable over its lifetime.

Slopes that face the sun (southern slopes in Canada) are good candidates, though flat sites will works as well. North-facing slopes are poor sites for passive solar unless the slope is very gentle.

The building itself will be oriented perpendicular to the sun at midday so as to maximize the exposure to the sun. If the building is slightly off, the loss is negligible. 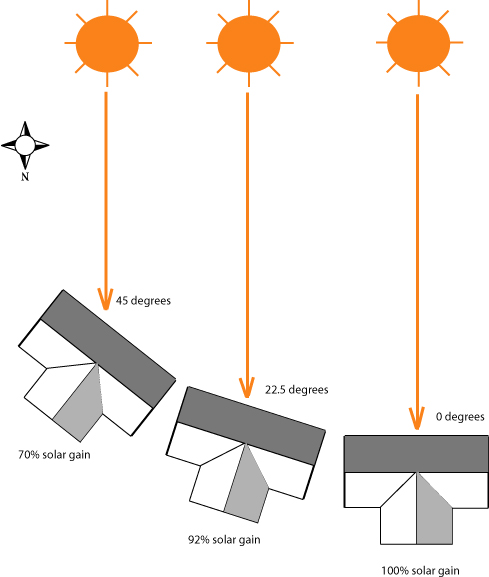 Solar energy is let into the building through its sun-facing windows (south windows in Canada). However, having too few windows will will lead to insufficient heating, whereas having to many will lead to overheating in the day and heal loss at night. The simple rule of thumb is to match the percentage of window coverage on the sun-side wall with the latitude. So, a home at 45o north latitude would have about 45% of it’s south wall covered in windows.

The energy gained from the direct sunlight will be lost after the sun goes down if it is not stored. We store it by means of a thermal mass. A thermal mass is simply a dense object such as rock or concrete that will store the sun’s energy.

The slab is insulated to retain the heat within the building. It is also a good idea to put “frost protection,” or “frost wings” around the perimeter of the foundation to help reduce heat loss. 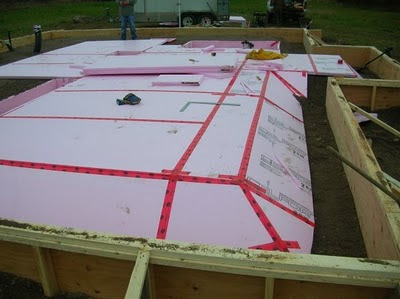 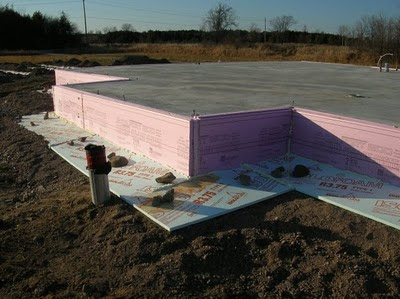 Here, “frost wings” have been added in addition to the perimeter insulation.

Additional thermal mass can come from structures such as a brick wall inside the house or a masonry heater. 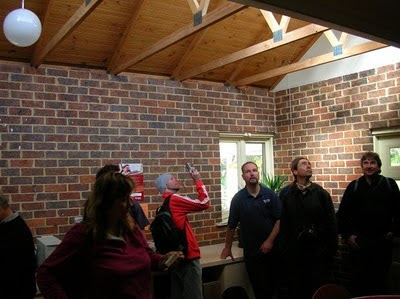 This house in Melbourne, Australia interior brick walls in the kitchen to store solar heat. 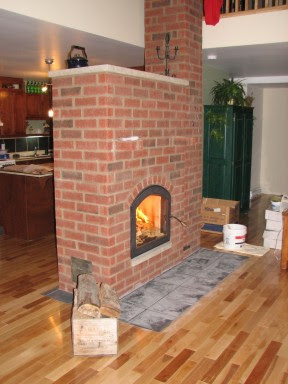 A masonry heater such as this one can provide a backup heat source while also being a thermal mass to capture solar heat.

Additional gain can be achieved by using reflectors to direct sunlight into the house that would otherwise be lost. This approach is somewhat limited as the sun sits very low in the sky in Canada during the winter and the pitch of roofs is generally too steep. 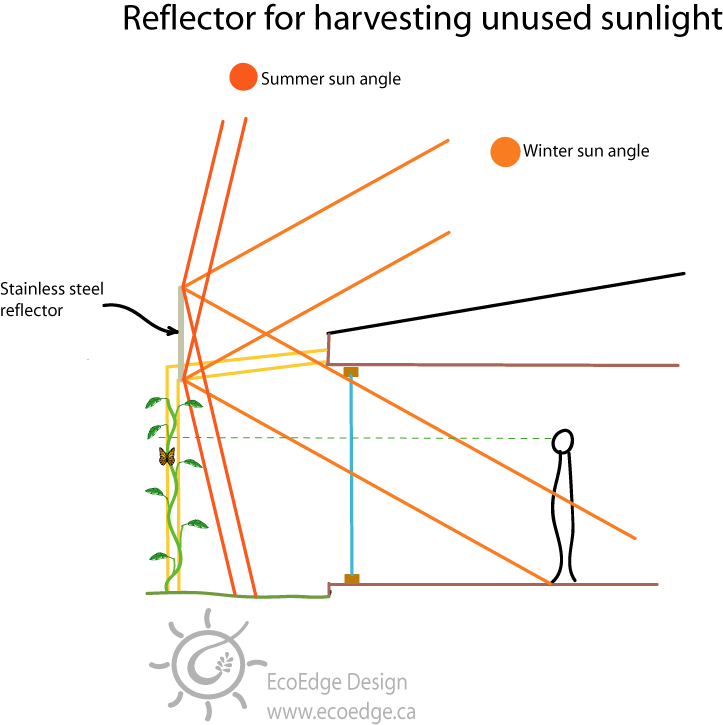 Two additional approaches to capturing solar heat are the trombe wall and the thermal siphon. From the outside, a trombe wall looks like a window built over a wall, but it is a very effective passive solar technique. A thermal mass wall is built then covered with glass to trap the heat it stores. 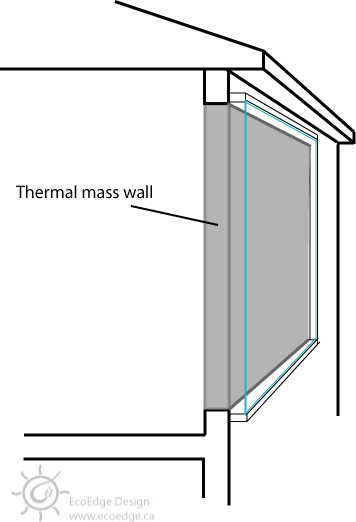 The thermal siphon is simply a window over an object that heats up (such as a piece of steel painted black) with vents to allow the heated air to escape into the house. 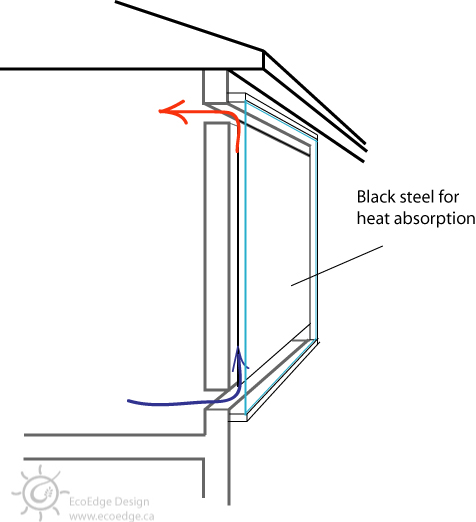 Something to remember is that not everyday is sunny, and that a backup heat source is necessary. Masonry heaters (mentioned above) make excellent backup heat sources. Unfortunately, building codes in Canada require a mechanical backup heat source, meaning that, unless you are building a cottage, you are required to install a conventional heating system. Though electric baseboards are the most expensive way to heat, they are the cheapest to install and will not be needed in a well designed passive solar home anyway. Code will also force you to have a better insulated home, if you are using electric heat, and that never hurts.

The building will ideally be a long, thin structure with the long edge perpendicular to the sun. To maximize solar gain, keep the sun-facing edge of the building a flat wall. Angled or rounded shaped decrease solar gain.

Generally, you want to position the rooms so that their usage throughout the day follows the sun. So, the kitchen will be in the east, receiving the first sun of the day. Most people do not mind sleeping in cool rooms, so locating them on the shade side of the building (the north side in Canada) frees up sun space for other rooms used during the daytime. That said, an east-facing bedroom (perhaps on the northeast corner) is a glorious thing.

The maximum and minimum sun angles during the summer and winter solstices respectively are found with by the following formulas.

Knowing this, you can use trigonometry to set your roof overhang so that you let sun in during the winter and keep it out during the summer. 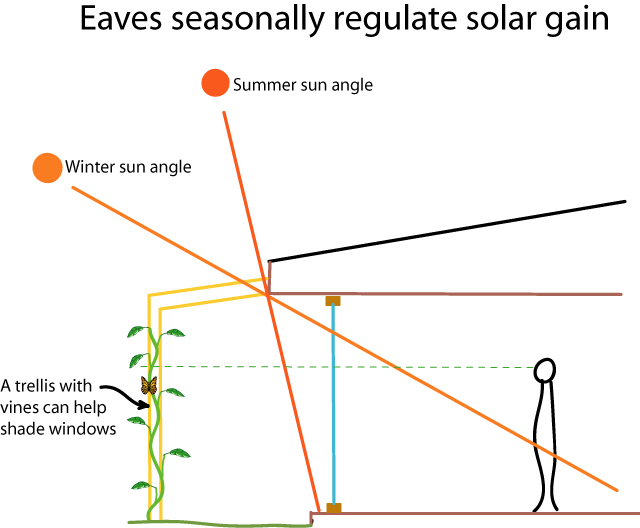 There is good news if you don’t want to muck about with trigonometry, though. You can have your rafters cut at a suitable length by nailing two pieces of wood together at the angle of the winter sun. Then place this guide flush against the wall at the top of your window and mark the point on the rafter that the guide intersects it. 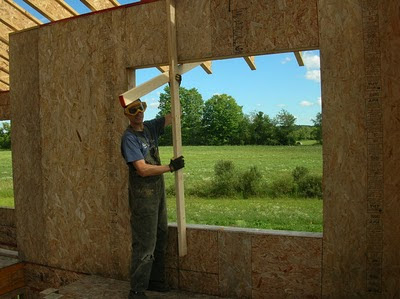 A guide set to the same angle as the winter sun can be used to determine where to cut the rafters to set the overhang.

With Canadian latitudes, this will mean that the eaves of the house are set rather large – on the order of two feet or even more. While this means more material cost in the roof, it also means the building will be better protected from the elements.

Making It Functional and Beautiful

While the techniques covered so far can help you to build an energy efficient, passive solar home, they won’t guarantee that it will be a home that you would want to spend any time in. There are architectural patterns that will assist in designing a livable home, however. Next, a good home has a flow to it. Movement through the home takes place through rooms rather than through hallways or passageways. This makes the rooms social and inviting. 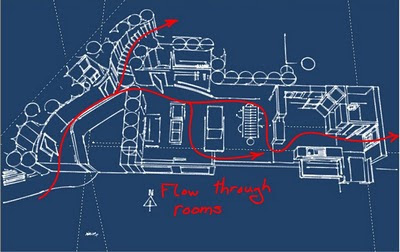 There should be a central common area that the major flows of traffic through the house intersect. 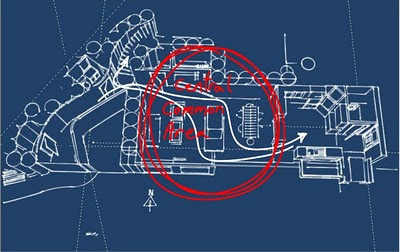 That common area will be improved if it has its own semi-private areas where people can sit off to the side but still be apart of the common area itself. 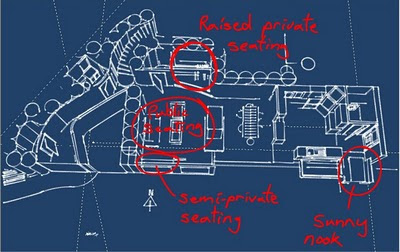 A room will be much more pleasant to live in if it has natural light coming in from two sides.

Crenelate the edge of a building. This will create usable and inviting spaces both inside and outside the building, increase airflow in the summer, and help to create rooms with natural light coming from two sides. 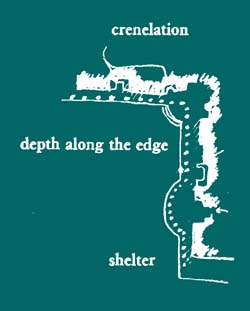 Having different ceiling heights in different rooms creates varied atmospheres in a home ranging from lively to more intimate. Such effects are easy to achieve in a 1.5 story house, which also happens to be the most efficient home to build in terms of building material.

Finally, a large, sheltering roof that the home is built into is both functional and aesthetic. Make at least one slope of the roof visible from the ground; and, if possible, low enough to the ground in places to touch. If this is done on the north side (in Canada) it will help the building to deflect cold northern winds in the winter. 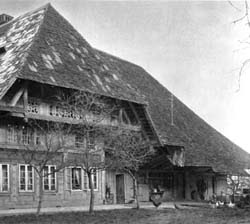