Arsenic in groundwater is a severe problem in West Bengal and in Bangladesh, where it is estimated to cause 200,000 to 270,000 deaths per year. [Other regions are also affected, including Argentina, Chile, China, India, Mexico, Taiwan, Thailand and the United States of America.]

In humans, arsenic causes arsenicosis which causes skin problems including skin cancer, bladder, kidney and lung cancer, disease to the blood vessels of the legs and feet which can lead to gangrene, and is suspected to contribute to diabetes, high blood pressure, and reproductive disorders. [Source WHO] The WHO’s Guideline Value for arsenic in drinking water is 0.01 mg /litre.

The problem of arsenic in drinking water can be tackled by harvesting rainwater – a strategy routinely advocated in permaculture.

Arsenic also affects agriculture in two ways: arsenic is drawn into plants contaminating the plant; and arsenic is drawn up instead of phosphorus, which is a major limiting factor in plant growth. The result is a plant that has a degree of toxicity and is stunted due to lack of phosphorus. When groundwater irrigation is utilised in areas with arsenic contamination, these problems appear.

The use of swales, or water-harvesting ditches on contour, is the most cost effective type of earthworks for capturing water. It also reduces or eliminates the need for groundwater irrigation. 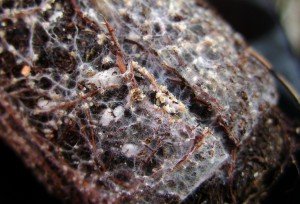 Arsenic (As) contamination of irrigation water represents a major constraint to Bangladesh agriculture. While arbuscular mycorrhizal (AM) fungi have their most significant effect on P uptake, they have also been shown to alleviate metal toxicity to the host plant…. Plant height, leaf/ pod number, plant biomass, root length, shoot P concentration/offtake, root P offtake and mycorrhizal infection decreased significantly with increasing As concentration. However, mycorrhizal inoculation reduced As concentration in roots and shoots. This study shows that growing lentil with compatible AM inoculum can minimise As toxicity and increase growth and P uptake.

A pot experiment was conducted to examine the roles of indigenous and non-indigenous arbuscular mycorrhizal (AM) fungi in As uptake by maize (Zea mays L.) from original As-polluteded [sic] soil, and their effects on As and P fractions in the rhizosphere…. All results indicate that indigenous consortia M2 could protect their host plants from the toxicity of excessive As through P nutrition by activating P, though non-indigenous M1 could alleviate As toxicity through stabilizing As and P in the soil.

It is reasonable to expect that other plants that form mycorrhizal associations would also have reduced arsenic uptakes from Glomus species and likely Acaulospora species as well. In arsenic-contaminated regions, it would be a good idea to inoculate soils with Glomus species and avoid practices that hinder mycorrhizal growth (ploughing, adding synthetic nitrogenous fertilisers, addition of too much phosphorus).