Patterns In Nature: Waves and Spirals

The information here will be instructive regarding the functioning of the universe (of which the designer should have at least a rough grasp). It is useful when considering the temporal aspects of growth (i.e. how things grow over time), but is only marginally useful as a physical design template. It does, however, happen to be really fascinating.

In Bill Mollison’s Permaculture: A Designers’ Manual there is a passing reference to “Winfree’s ‘doped’ chemicals” that long ago caught my eye. The chemicals Arthur Winfree was working on were, in fact, the Belousov Zhabotinsky Reaction, which is what is known as a reaction-diffusion system. As we’ll see, such systems govern many of the biological and physical systems we see in nature.

Before we get too far ahead of ourselves, let’s start with Boris Belousov. Belousov was looking for clues on the glycolysis process (and happened to be on the right track, too). He found a reaction that would react, reverse, and repeat the process with a regular period.

In trying to get his research published, he was given the brush off by the establishment because, to the world of chemistry at that time, what he was claiming sounded akin to striking a match, then having the process reverse, then reignite, then reverse, and so on. All known reactions at the time settled linearly into an equilibrium state.

Later, Anatoly Zhabotinsky took a look at Belousov’s work, and expanded on it. The reaction the two scientists pioneered became known as the Belousov-Zhabotinsky reaction. The BZ Reaction is a catalytic reaction in which the catalyst forms out of the reactions own reactants. This autocatalysis burns out and meets with a different reaction that forms products needed to restart the autocatalysis once again.

In the reaction, travelling circular waves emerge and propagate outward. Should those waves happen to meet with an obstruction in the medium, they form spiral waves – something we will come back to several times in our explorations here. Describing it only goes so far. It’s better to see it for yourself.

Reaction-diffusion systems also occur in nature – a lot. In a biological system, cells will start in a state susceptible to excitation. They become excited from the stimulus of neighbours, passing on the excited state. They then go into a period of recovery. This is embedded in the mathematical template governing the chemical automation that runs your body, other life forms, species interaction, and possibly galaxies, too.

Your heart operates this way, for instance. A wave propagates across your heart, giving the cells an instruction to beat. If it meet an obstruction – a damaged area of the heart – a spiral wave can form and propagate, as in the BZ reaction. This is what happens in ventricular fibrillation when one has a heart attack. 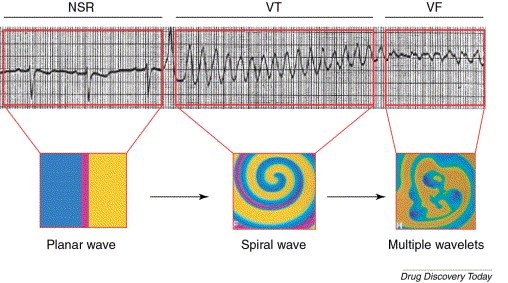 This same reaction-diffusion dynamic (excitation, spread, recovery) occurs in interacting species populations, as well. For instance, you see the waves temporally in pest populations in your garden. The pests appear, providing an untapped food source. Predator populations then respond with increased localized populations, reducing the initial wave of pests. The loss of food leads to a decline in predator population, allowing a recovery of the pest/prey population.

Similarly, you might also notice this model is at least prima fascia applicable to memetic social systems like propaganda, for example. True or false horror stories about the official enemy emerge, followed by outrage in the population with potentially deadly results, followed by a return to relative sanity. Repeat as necessary, nationality irrelevant. You might also imagine similar patterns emerging in economics, fashion, and so on.

Let’s consider a bacterial population. One cell emits a chemoattractant that diffuses out into the medium it is in. Detecting this signal, neighbours are drawn in. The neighbours congregate where there is the greatest concentration of chemoattractant, resulting often in either circular waves, or spiral ones. Spiral wave propagation looking in Dictyostelium discoideum looking very much like the BZ reaction. From metafysica.nl.

I’ve noticed the same pattern often emerges in mycelial propagation. Enter Paul Stamets who has noted the appearance of these patterns in his book Mycelium Running.

Nature tends to build on successes. The mycelial archetype can be seen throughout the universe: in the patterns of hurricanes, dark matter…. The similarity in form to mycelium may not be merely a coincidence. – Paul Stamets, Mycelium Running

From Mycelium Running by Paul Stamets

I would say indeed it may not be. I would argue that these forms are mathematically predestined. (This is not to suggest, however, that hurricanes are the product of reaction-diffusion systems. They emerge out of fluid dynamics.)

Galaxies? Really? Come off it!

I had always only ever thought of galaxies coming about as a result of gravitational interactions. My education in physics being limited to undergrad studies, I did not encounter much in the way of astrophysics, unfortunately. As it turns out, the way I had envisioned galaxy formation to occur would, in fact, result in a galaxy that would quickly wind so tightly was to appear to be just a nondescript disc.

This problem of formation was mostly solved when Chia-Chiao Lin and Frank Shu proposed the Density Wave Theory, in which the density of the spiral arms of the galaxy prevents the galaxy from winding up into a disc.

It is a great theory, elegant, simple, plausible, and with backing evidence. But it doesn’t quite explain every type of spiral galaxy. Theoretical physicist Lee Smolin had a look at the problem of galaxies where the density wave doesn’t hold, and proposed a hypothesis whereby the galaxy was actually one great reaction-diffusion system. In his model, shockwaves from star formation and supernovas drive one reaction, and ultraviolet radiation from giant stars serves to inhibit it. The hypothesis isn’t perfect but just might explain some aspects of galaxy formation.

The BZ reaction shows a two dimensional expression of the propagation of travelling waves, or spirals, as the case may be. Taken in three dimensions, the travelling waves form expanding toroids, or, in the case of spirals, scroll rings. This form is reminiscent of the much talked about but perhaps sometimes misunderstood “core model” in permaculture (more on this in a future article). 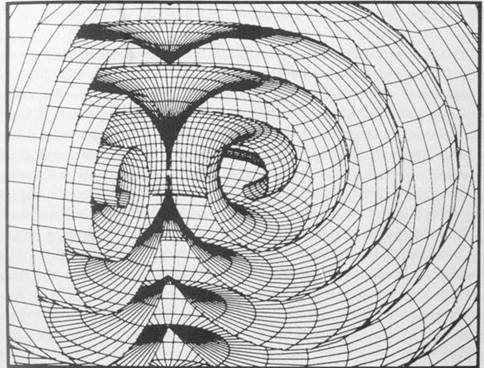 Take the example of a jet of fluid flowing forward into a medium. The leading edge thrusts forward, and friction at the sides slow it down, creating a mushroom shape. These edges often form spirals as the following image of a portion of a von Karman vortex street shows. Keep in mind, however, that this is a characteristic of fluid dynamics, and not the product of a reaction-diffusion system. I am including it for illustration purposes only. Remember, though, that the appearance of spirals in a reaction-diffusion system is a result of fluid dynamics. Hence the relevance. 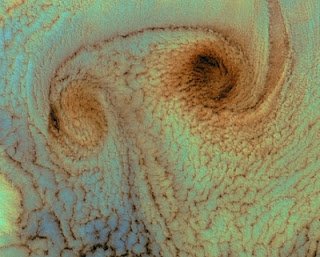 Portion of a von Karman vortex street. From Nasa.gov.

So there you have it, spirals from wave propagation. Is there some great mystical universal something going on? I believe these patterns emerge because they must. They are the mathematically prescribed result of chemical interaction in space and time. Galaxies do not form giant portraits of Homer Simpson because that is not a mathematically possible outcome. Bacteria propagating in a uniform petri dish do not form interlaced nonagons because that is not a possible outcome. What you see is what you can get.