Note: While this piece is rather hard on the practices of conventional agricultural science, it is not to be taken as an indictment of science or the scientific method. Indeed, I greatly encourage more science. What motivated me to write this is the alarming positions and attitudes of followers of the unscientific religion of scientism, which I feel is one of the more harmful fundamentalisms in the world today. Also note that this was written at a time pre-CRISPR-Cas9.

Imagine two different people of two different mindsets want to grow corn: one a permaculturist, the other a conventional agricultural scientist. Imagine both have unlimited resources. One sees corn as being a part of an interconnected system that interacts with everything around it. The other sees corn as a combination of inputs. One view looks at corn as an organism that affects and is affected by its environment. The other view looks at corn as a machine.

The agricultural scientist knows that corn is a demanding crop, so after plowing the land and applying glyphosate herbicide on upstart weeds, he or she fertilizes the soil with a commercial synthetic fertiliser. After all, plants grow better when they have a good nutrient supply. Unfortunately for the scientist, plowing kills beneficial worms and fungi and damages soil structure, increasing erosion. Plowing also oxidizes some of the carbon in the soil, releasing it to the atmosphere as CO2. Apart from being a significant contributor to green house gas emissions, this also reduces the carbon content. Reducing the carbon content reduces the cation exchange capacity of the soil, which is the ability of the soil to transfer essential minerals to plants. In other words, it makes the soil less fertile.

The glyphosate applied might be a brand that has a surfactant which is highly toxic to amphibians. In any event, glyphosate increases the risk of fusarium, a toxic fungus. Glyphosate is also linked to acute health risks including but not limited to headaches, skin and eye irritation, nausea, numbness, increased blood pressure, and heart palpitations and longer term health risks including lesions in salivary glands, inflamed stomach linings, genetic damage in human blood cells, reduced sperm counts (in testing on rats) and abnormal sperm (in testing on rabbits), and cancer (non-Hodgkin’s lymphoma in humans and liver tumors and thyroid cancer in rats). So, let’s hope the scientist is careful and has good health coverage. 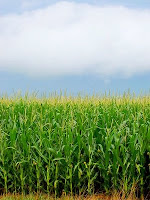 Hopefully, the fertiliser is not one that holds the nutrients in a cadmium salt as cadmium will further kill off fungi. On its own, the synthetic fertiliser will shift the soil in a bacteria-dominant direction and reduce fungal content with or without cadmium. The synthetic fertiliser also reduces the carbon content of the soil making it less hospitable to life and less fertile, reducing its capacity to retain water, and degrading soil structure thus increasing erosion.

As the corn starts coming up, weeds start popping up again, so a second run with glyphosate is made. This time, the agricultural scientist experienced some tingling skin and burning sensation in the throat.

The corn came up, but the field was full solely of corn, proving to be a smorgasbord for corn borers. Even spraying could not control them all. Clearly there is a problem. 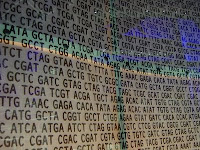 Being clever, the scientist goes into the genetics lab and isolates the cry 1Ab gene from Bacillus thuringiensis ssp. kurstaki, the nptII gene, an intron (a non-coding section of a gene) from the heat shock protein hsp 70, the CaMV 35S promoter gene from the cauliflower mosaic virus and the NOS terminator sequence from Agrobacterium tumefaciens and sets them on the plasmid vector pV-ZMBK07. Plasmid vector pV-ZMGT10 carries the CP4 EPSPS gene from Agrobacterium tumefaciens and the gox gene from Achromobacter strain LBAA and the nptII gene. These are coated on microscopic BBs and fired into corn cells to transfer the DNA. Simple enough, right?

Wow. Millions of dollars later, the copy of the gene cry 1Ab gene was incomplete. If you don’t know what this means, don’t feel bad. No one does. No one knows exactly how this affects the functioning of the genetically modified corn. There was another problem, unfortunately. The terminator sequence to turn off the promoter gene was absent but made it to market anyway. Promoters can affect the DNA 40,000 base pairs down from them. So what is the CaMV 35S promoter promoting besides the inserted transgenes? What are the health implications, if any, of this? What are the environmental effects? Is the incomplete cry 1Ab gene coding for something slightly unique rather than the predicted insecticidal toxin? If so, is this unique attribute helpful or harmful to human health? Independent research has suggested that there were some deletions or rearrangements in the host corn DNA. What affect, if any, is this having on the corn’s nutritional content, human health and environmental safety? Is glycosylation (an enzymatic process attaching carbohydrates to other molecules in cells) causing unpredicted effects when this GMO is ingested? This has been seen with other GMOs. Has the disruption in gene order (something known to be important) had any harmful side effects? And if the only changes made are those that theory designed and predicted, why does this corn have higher lignin content than conventional corn? What about the recent finding of decreased fertility in rats fed the corn?

And it turns out that the pollen and detritus from the plant are toxic to caddisflies. Further research is not done, however, as industry-lead science is not interested in funding a project that might show that one of its controversial cash cows may be dangerous.

With millions spent, the agricultural scientist has increased greenhouse gas emissions, decreased soil fertility, increased erosion, increased pest losses, decreased yield, killed off local amphibians, decreased biodiversity, consumed more energy than the crop yielded, and compromised human and environmental health in a number of different ways. If that were not enough, 10 calories of energy were consumed to produce one calorie of corn.

It must first be noted that the permaculturist uses sustainability as a measuring stick. That means the energy created by his or her system to grow corn must capture and store more energy than goes into creating and maintaining that system. In other words, the net energy balance must be positive without fudging the accounting.

The permaculturist knows that corn is a demanding crop and will require healthy soils. As such, he or she has set aside a patch and has allowed it to overgrow with weeds and has chopped and mulched those weeds in place to build up soil fertility. Perhaps the permaculturist has added some kelp meal for trace elements. He or she has seeded the site with mycorrhizal fungi spores and/or transplants (probably Glomus species) to increase plant health. King stropharia mushroom spawn (Stropharia rugoso annulata) is added to the mulch to benefit the corn and provide an extra yield as is done in Eastern Europe.

Climate permitting, the permaculturist might adopt the Central American technique called frijol tapado. This method involves allowing the land to fallow for 2 or 3 years until woody weeds are dominant. Grasses will be competitive with the crop, but the woodier weeds will not be. Beans and corn are scattered directly into the weeds. Then the weeds are chopped and dropped to create mulch for the crop. (This system works well enough to produce 60 to 70% of the beans grown in Costa Rica.)

If this technique is not possible, the site needs to be cleared for planting. But the idea of tearing up the soil is unthinkable as it destroys fungal life in the soil, decreases fertility, and breaks down soil structure, contributing to erosion. Furthermore, the act of plowing creates an ideal niche for a raft of weeds that thrive in disturbed soils. The clearing could be done by hand, but doing the work yourself when it could be done by another and could benefit another is foolish. So, the permaculturist sends in the chickens. Penned in the desired area and kept on the hungry side, they tear through the weeds and contribute phosphorus-rich, natural fertiliser at the same time. Their droppings will also increase the number of worms on site, further benefitting the soil. 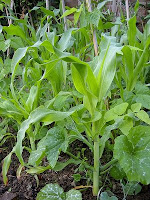 The corn is planted, but to help meet nitrogen needs, it is intercropped with clover and beans to fix nitrogen. Beans have also been shown to decrease outbreaks of leafhoppers and fall armyworm when intercropped with corn. Clover and soybeans have been found to decrease losses from the European cornborer. Weeds want to be avoided, so to back up clover as a ground cover, squash is planted. The added benefit to this groundcover is the food it yields. Squash also reduces losses in corn to spider mites and aphids. Bee balm is thrown in as a beneficial attractor, encouraging predatory insects and attracting pollinators. Over-concentrating corn is avoided as this would be too attractive to pests. Dr. Jane Mt. Pleasant of Cornell University has run trials of 3-sisters plots (3 sisters being a corn, bean and squash mix) against conventionally grown monocultural corn plots and found the calories produced in the 3-sisters system were 17% higher per unit area.

Wildflower strips along the perimeter of the patch are intentionally grown. These provide a haven for predatory insects, allowing them to overwinter and providing summer habitat for them. The flowers act as attractors for beneficial parasitoids, which help control pests such as cornborers. These parasitoids seek out caterpillars like the cornborer and lay eggs on them. The eggs hatch and burrow into the caterpillar, eating it from the inside out. The sugars from the flowers increase the adult parasitoids’ fertility, lifespan, and host-searching activities. The permaculturist is confident in this approach because field studies have shown this technique to be effective in controlling pest insects.

The permaculturist also plants silverleaf desmodium (Desmodium uncinatum) and molasses grass (Melinis minutiflora) in patches amongst the corn, which has been shown to repel stem-borers. Sudan grass (Sorghum vulgare) and napier grass (Pennisetum purpureum) are planted on the margins as this has been shown to lure away stem borers. Furthermore, all four of these grasses are useful as animal fodder. In Kenya where this method was developed, stem borers were shown to be cut by 80% over control plots.

As the soil has been built up, it grows healthier food. Recent research by chemist Dr. Donald R. Davis of the University of Texas shows significant declines in nutrition in conventional agricultural produce over the past 90 years. And this falls in line with other studies as well.

So, the soil in the permaculturist’s plot has been fed and the use of plowing and biocides avoided, increasing soil life. In other words, the soil is in a healthier condition than it previously had been. So compared to the agricultural scientist’s approach, the soil is healthier, the food is healthier, biodiversity is greater, the watershed has not been contaminated, pest losses are lower, more calories have been produced, less money has been spent, and human health has benefited from the practice rather than been compromised.